Am I Safe to Report When My Company Is Corrupt? 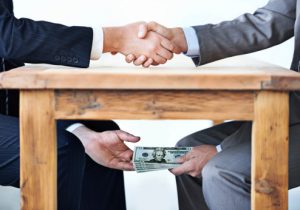 It is hardly a secret that businesses are not always entirely honest about what they are doing and how they are doing it. Sometimes, this is a matter of proprietary systems, but too often, it is a sign of corruption within the company.

When something that may be unethical crosses a desk, it puts an employee in an uncomfortable position, in which they have to choose whether to participate in something they know to be wrong, or stand up and risk retaliation from their boss. Preparing for possible retaliation and knowing your options may equip you to do the right thing with greater confidence and success.

What is Workplace Retaliation?

Workplace retaliation may take a number of forms, and all of them are illegal. This is usually seen as harassment, discrimination, or wrongful termination in response to an employee or applicant who has either refused to participate in unethical behavior or has reported unethical behavior to people who can act on the charges. The Equal Employment Opportunity Commission has a page briefly describing this practice.

Illegal workplace retaliation may be in response to a wide array of activities, including but not limited to an employee answering questions honestly during an investigation, asking managers or co-workers about pay rate differences, refusing to comply with discriminatory practices, refusing sexual advances, reporting unethical behavior, or requesting accommodation for a disability or religious practice. Sadly, if an employer is willing to act in an unethical manner that catches the attention of an employee, they may also be willing to act in an unethical manner to punish that employee.

What Do I Do When Targeted?

While written from the perspective of Human Resource managers, Talent Management and HR has a solid guide that all employees can apply to their own situations. Much of the advice addresses reasons employees may hesitate to report unethical behavior and ways to hopefully avoid conflict. The section on what you can do has some solid advice, including seeking allies and keeping records.

It is possible that, even if you resist engaging in unethical behavior, you could be named as knowing about it. Trying to correct the issue and having a record of conversations in which you pushed against that course of action can be used to help protect you in such an event. Having people who can testify on your behalf is also beneficial.