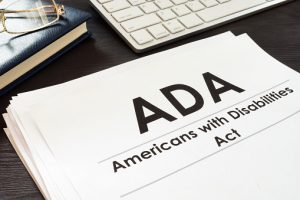 Massive layoffs at Walmart demonstrate a part of a larger problem

Historically, employees with cerebral palsy, autism, and other disabilities have taken simple jobs such as greeting customers at the entrance of Walmart, according to NPR.

Earlier this year, Walmart announced that they would be changing the role of greeters to “customer hosts.” In addition, they would add a slew of job demands – including assisting with returns, cleaning up spills, collecting shopping carts, climbing ladders, and lifting up to 25 lbs. Since many people with disabilities are unable to perform these tasks, layoffs will occur at 1,000 stores across the United States.

This puts people with disabilities at a large disadvantage when it comes to being able to earn a living. The author of an article in The Oracle discusses the challenges of people with disabilities finding a job. She states, “I hate to say it, but it may be because I am in a wheelchair and have cerebral palsy. It is illegal for a job application to ask the applicant if they have a disability. Despite this, I did have to disclose if I was disabled or not” on my application.”

In one particular interview, she discussed the feeling of judgment she received upon arrival. She shook it off and focused on showing that despite her disability, she makes a good candidate. But she was turned away. And this wasn’t the only time she was rejected from employment at an interview.

What employers are prohibited from doing

According to the U.S. Equal Employment Opportunity Commission (EEOC), anytime an employer treats a qualified applicant unfavorably due to a disability covered by the Americans with Disabilities Act (ADA), this counts as discrimination.

Employers are prohibited from engaging in any form of discrimination when it comes to hiring, firing, wages, assigning job duties, issuing promotions, and any other aspect of employment. During the interviewing process, they are not allowed to ask applicants to discuss their disabilities or answer medical questions.

In addition, employers are required to provide “reasonable accommodations” to allow employees with disabilities to perform their job, unless doing so would result create financial hardships.

In order to qualify for protection under the ADA, employees or applicants must suffer from a physical or mental impairment that affects their ability to perform certain job functions. Some common disabilities covered under the ADA include:

If you were mistreated by an employer, fired, laid off, passed on a promotion, or denied employment due to a disability protected under the ADA, you have rights that must be upheld.

The attorneys at Klie Law Offices would like to speak to you and review the details surrounding your incident of discrimination. We have years of experience handling all types of workplace discrimination cases and helping employees seek the justice they deserve.

Contact us today to set up your free case evaluation.