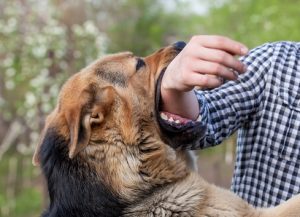 During the summer months, many people put their dogs outside in their yard or take dogs to parks. At the same time as more dogs are outdoors, there are also more children playing and more people outside enjoying nice weather. Dogs and people can coexist wonderfully, as long as a dog is well-trained and under the owner's control. In some cases, however, an experienced premises liability lawyer knows a dog can get loose and become violent. Dogs can attack in parks, on private property, and in many other settings. When they do, serious and sometimes permanent or fatal injuries may occur.

Victims of dog bites need to know their rights, and dog owners should know what their responsibilities are to protect their canine companion and to reduce the chances of becoming liable for injury losses.

Dog bites are set by law in each state, with some locations imposing much more responsibility on dog owner's than others. In some states, a strict liability rule makes a dog owner responsible any time a dog bites someone with limited exceptions like if the dog is on the owner's property and/or provoked in the attack.

West Virginia does not have a rule imposing automatic liability on people who own dogs, except if the dog is running loose. Under Code Section 19-20-13, the law establishes an owner of a dog running loose is strictly liable for harm the dog does when running free. The statute states: "Any owner or keeper of any dog who permits such dog to run at large shall be liable for any damages inflicted upon the person or property of another by such dog while so running at large."  This means a victim injured by a dog running free does not have to prove the dog's owner was negligent or the dog had a bite history. If the victim can show the dog was running loose when the harm occurred, compensation should be available.

There are also other cases when dog owners can be held responsible. For example, if a dog has a history of aggression towards people and the owner takes him to the park and lets him loose, this is a situation where the owner could be liable for a resulting bite. When the limited strict liability rules do not apply in West Virginia, a victim will need to prove the dog's owner was negligent or unreasonably careless and that the carelessness led to the harm. If a negligence case can be proved, the victim should be fully compensated for losses.

Dog bites often cause serious and lasting harm, as well as injuries that are expensive to treat. Plastic surgery is often required after a dog attack and scarring and disfigurement may be permanent. A dog's strong jaws can also break bones and can be fatal.

To avoid dog bites, those who are outside should not approach strange dogs. Dog owners should also keep their dogs secured in their yards or on a leash at all times.