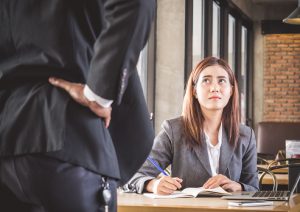 All types of harassment are illegal, yet proving it may not always be easy, as some forms of harassment produce little-to-no evidence. Unfortunately, victims of harassment don't always recognize harassment occurs. Some aren't aware of what constitutes harassment. Even those who do are often afraid to report it due out of fear of retaliation.

There are a number of different circumstances in which workplace harassment can occur. The perpetrator may be a supervisor, agent of an employer, a co-worker, or nonemployee. Additionally, a person other than the one being harassed can be negatively affected.

"Some behaviors, albeit making someone uncomfortable, can seem so harmless – there are no physical signs of abuse – that few people want to report them for fear of being seen as petty or as a snitch," says Chris Chancey, founder of Amplio Recruiting, a staffing agency that specializes in building a refugee workforce.

"If you are being harassed or think you may be, but are too scared to go forward, educating yourself on the facts is a great way to gain confidence to stand up for yourself," said Garvin.

The Business News Daily article identifies five of the most common forms of workplace harassment and offers advice on how to identify them. These include:

Are you a victim of workplace harassment? Here's how you can take action.

Less explicit forms of workplace harassment may create a gray area that allows perpetrators to continue their behavior without facing consequences. If you're a victim of workplace harassment, the idea of reporting it may make you feel nervous or uncomfortable. However, incidents of harassment will only continue if you don't take action. That's why it's important to take harassment seriously and address it promptly with the utmost discretion.

You may report incidents to your employer's human resources department even if no physical evidence is available. Additionally, a perpetrator may have already been reported by other victims and may be under investigation.

Unfortunately, action isn't always taken to address or prevent workplace harassment. That's why it's critical to discuss your matter with an experienced West Virginia employment lawyer as soon as possible. Your attorney may negotiate directly with your employer or proceed with a lawsuit if an agreement can't be reached.

Don't wait. Due to West Virginia's statute of limitations, you may have only up to two years to report an incident. The legal team at Klie Law Offices can help you through the process. Contact us today to get started.