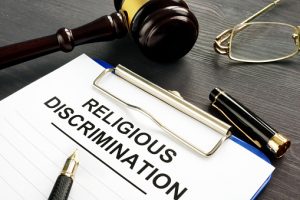 Religion can be a sensitive subject for some people. It can evoke disagreements and even outright disdain among opposing parties. Regardless of what one’s view is on a specific religion, or religion in general, discrimination and segregation have no ethical or legal standing in the workplace.

Religious discrimination in the workplace may manifest through:

Many employers continue to break the law

Religious discrimination often involves alienating an employee or job prospect because of his or her faith. Despite the regulations set forth by Title VII of the Civil Rights Act of 1964 – which protects employees of all religions (or lack of) from discrimination – many employers still choose to break the law. They may do so by omission or by engaging in discrimination directly.

That’s what happened to one Muslim man who was solicited for a tech job with Samsung in 2017. After completing two of the three interviews, he went on to his third interview – to further determine if he would be a good fit. During the process, he was repeatedly asked about his Muslim faith and whether he drank alcohol. After stating he that he didn’t drink (but had no issue with others drinking), the employer ended the interview. He was later notified that he didn’t get the job.

Incidents like this happen far too often in the United States and impact people from many different creeds and backgrounds. In 2017, there were approximately 84,254 workplace discrimination charges filed with the EEOC, with 3,436 of them involving religious discrimination.

Regardless of your faith, you deserve to seek employment and earn a living without being alienated. If you have faced religious discrimination at work, or while seeking employment, it’s crucial that you speak to an experienced West Virginia employment attorney as soon as possible. In West Virginia the statute of limitations for workplace discrimination is two years. Additionally, the longer you wait, the more difficult pursuing your claim can be.

The legal team at Klie Law Offices has more than a decade of experience handling all types of workplace discrimination. We’ll work with you every step of the way. Contact us today to discuss your legal options.