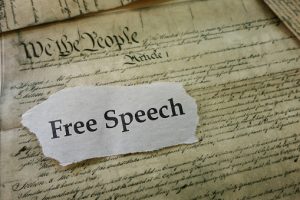 Free speech has become a heated topic in the political arena recently. The public is increasingly polarized, and opponents are clashing with sometimes violent results. As the debate spreads into the workplace, some workers are finding themselves disciplined for their statements and activities during non-working hours.

This raises a complicated issue: Do employees truly have a protected right to free speech?

West Virginia employment attorneys recognize the answer is not necessarily black-and-white. An administrative law judge in West Virginia recently ordered reinstatement of a state employee who had been fired for speech the employer deemed offensive.

Judge Reinstates Employee After He Was Terminated For "Inappropriate" Comments

It's a case that underscores issues of free speech in the workplace. According to The Charleston Gazette-Mail, the employer claimed the man had been fired for referring to a novel by former President Jimmy Carter as "homo," and subscribing to a Civil War electronic mailing list with racist comments in its forum.

It is important to note the specific circumstances of this case. While the judge did consider the employee's comment about Carter's book to be "inappropriate," the case was ultimately decided by the finding that the manager's testimony was not credible. Rather than condoning the inappropriate comment and email subscriptions, the judge was actually condemning the manager for what was deemed to be retaliation for filing an ethics complaint. The judge also noted that, despite the director's claims that the electronic mailing list was run by a racist organization, he had presented no proof that the employee opened messages from any other members, nor established exactly what these allegedly racist messages said. This suggests that future cases may not be so forgiving of "inappropriate" employee comments.

What Rights Do West Virginia Employees Have To Free Speech in the Workplace?

This and many other cases raise the confusing issue of exactly what opinions and expressions employees have the right to make in the workplace. In general, employers can set policies for appropriate workplace conduct, including language which cannot be used. Controlling employee speech and conduct outside the workplace is generally more difficult for an employer to do.

In certain circumstances - especially where the behavior damages an employer's reputation or otherwise hurts its financial interests - a court may affirm an employer's decision to discipline an employee for conduct outside the work space.