When West Virginia employees report illegal conduct by their employer, they are entitled to the protection of whistleblower laws. Article 1 of Chapter 6C of the West Virginia Code (known as the "whistle-blower law") prohibits discrimination and retaliation by employers against an employee who makes a good faith report of wrongdoing or waste to an appropriate authority. The federal Occupational Health and Safety Act also prohibits employment retaliation against workers who report violations of the Act. Employers who do not appropriately respond to whistleblower complaints may therefore face legal liability under both state and federal law. 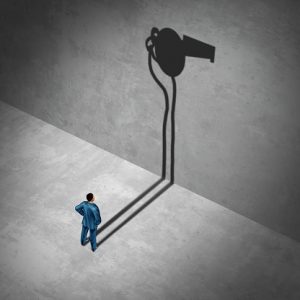 Employers can encounter many different types of whistleblowers in their daily operations. Most people imagine the classic example of a low-level employee who alerts federal authorities to embezzlement, fraud, or other white collar crimes. But these types of blatant offenses are increasingly rare. Whistleblowers can bring attention to a wide variety of far more subtle violations. All of these circumstances can expose the unprepared employer to legal liability, poor public relations, and other damaging consequences.

Whistleblower Violation Penalties May Get Tougher in West Virginia

One of the first two bills introduced in the 2017 state legislative session would increase the penalties for individuals who retaliate against whistleblowers. The News Center reports that the bill would increase fines from $500 to $5000, and also allow public agencies to fire employees who violate whistleblower law. The bill passed the House of Delegates unanimously. It will now proceed to the Senate Judiciary Committee for discussion and vote.

Whether the bill passes the state senate or not, it signals a shift in public sentiment toward whistleblower protection in the state of West Virginia. Unanimous approval in the House of Delegates indicates that both the public and its elected officials intend to hold those who violate whistleblower laws accountable for their actions. Across the nation, whistleblower issues are becoming front page news, as the Trump Administration responds to reports that are either leaks or protected whistleblowing, depending on which side of the political spectrum one falls on.

Whistleblower law is also on the Supreme Court agenda for its current judicial session. According to Reuters, the Supreme Court will resolve a dispute between Circuit Courts on whether the broad whistleblower protections of the Dodd-Frank Act apply to employees who report corporate financial wrongdoing internally, rather than reporting it to the Securities and Exchange Commision. The 2009 Dodd-Frank Act offers far more expansive protection for whistleblowers than the 2002 Sarbanes-Oxley Act. Dodd-Frank defines whistleblowers as only those who report wrongdoing directly to the SEC, but the SEC's published interpretation of the act states that employees qualify to sue under Dodd-Frank regardless of whether they reported to the SEC or not.

These heated issues are likely to continue to be front page news across both the state and the nation. Whistleblowers can protect their legal rights with the sound advice of an experienced West Virginia employment law attorney.